The finals of the 2022 Malaysia Open are set after victories for Olivia Fiechter, Nele Gilis, Tarek Momen and Mazen Hesham at the National Squash Centre in KL. 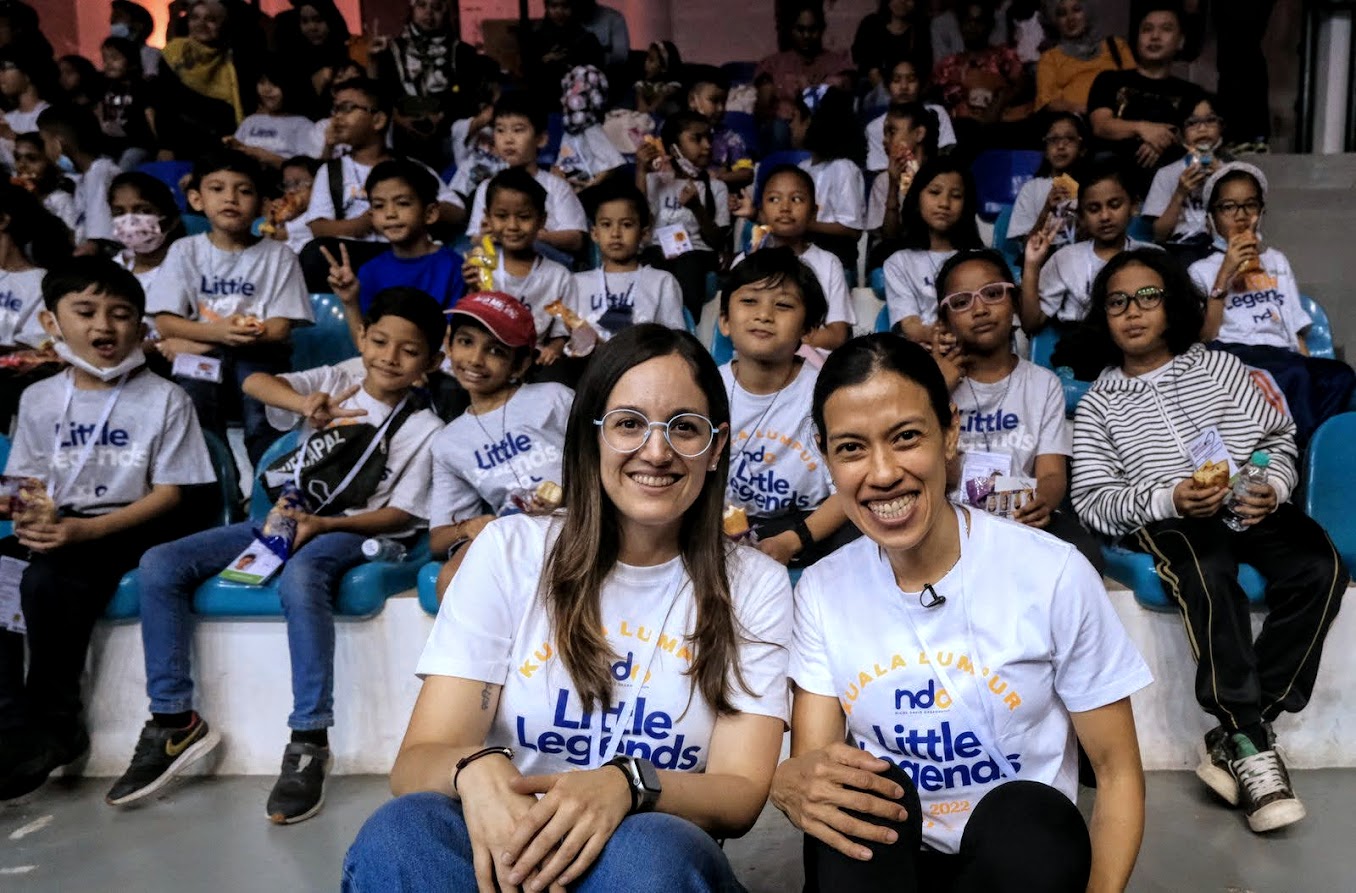 The opening match was witnessed by Malaysian legend Datuk Nicol David accompanied by children from her “Little Legends” academy.

USA’s top seed Fiechter came from a game down to beat Tesni Evans, and will meet second seed Gilis in the women’s final after the Belgian ended home hopes with a five-game win over Rachel Arnold. 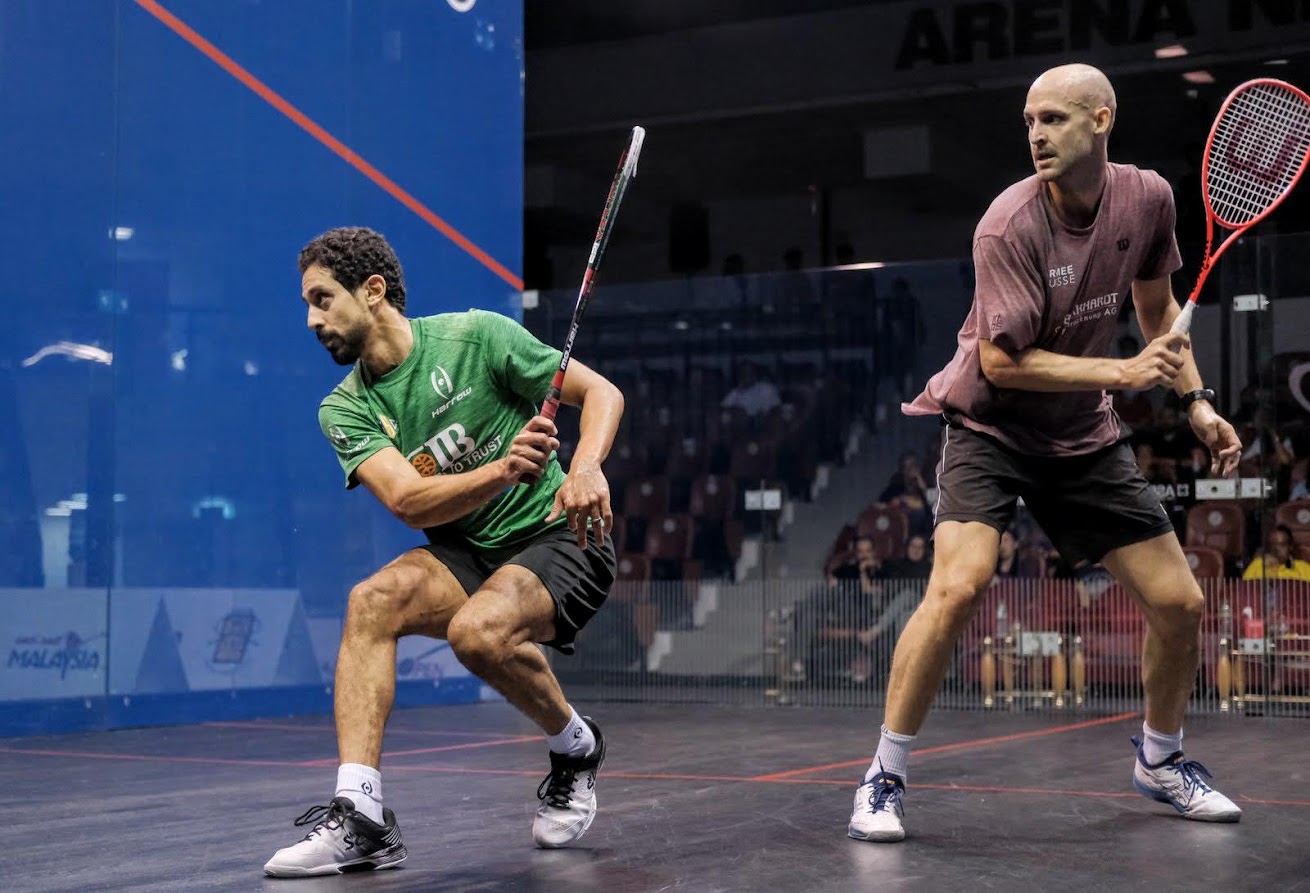 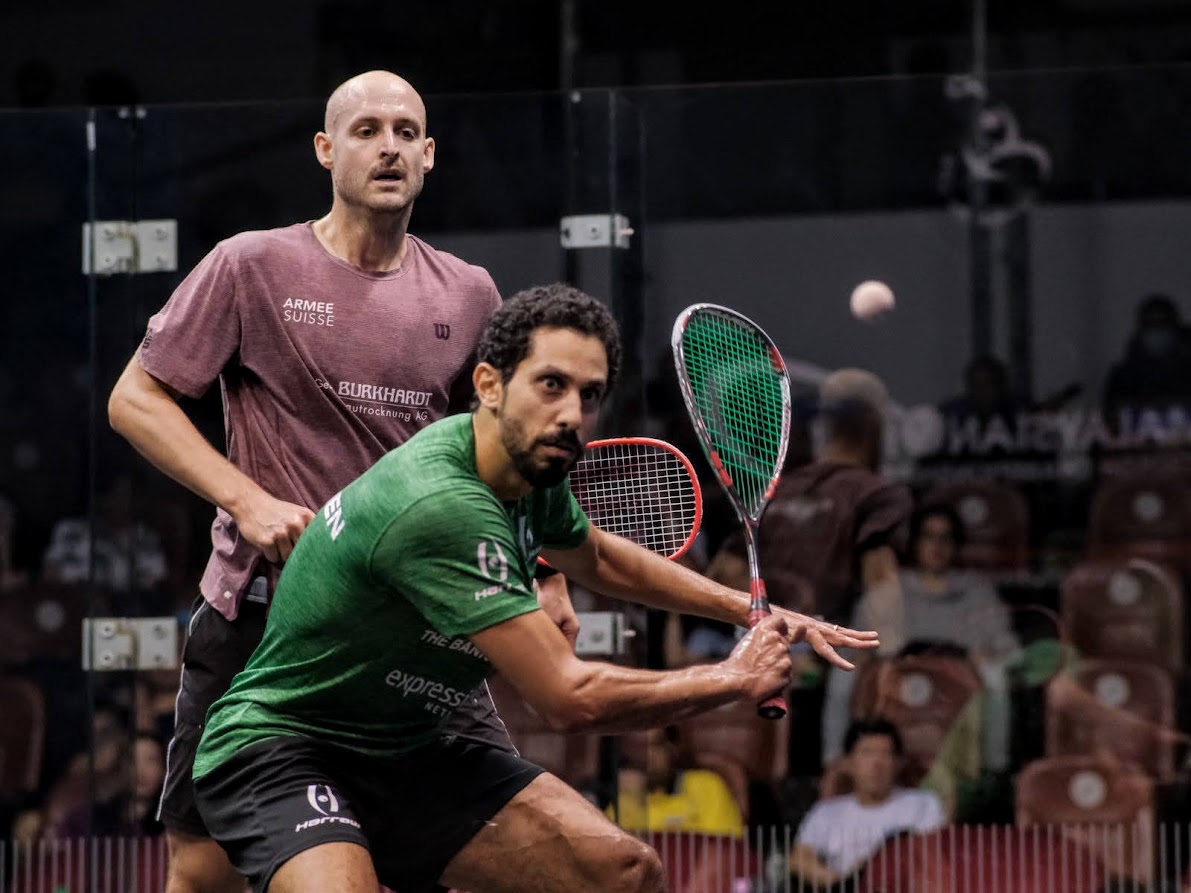 Momen came out firing in the first game and was all over the Swiss No.1, attacking the front corners with superb accuracy and feel to drag the frame of Mueller up the court and test his movement. Momen’s high-risk style of play usually brings errors but the tin was nowhere to be seen in tonight’s performance as he looked completely at home on the glass court.

After taking the first game 11-8, the accuracy and pace of ‘The Viper’ only improved. Momen’s length hitting was forcing Mueller to hit loose balls around the middle, which lit up the Egyptian’s eyes as he clinically dispatched most opportunities that came his way. He went from strength to strength to take the following two games 11-6, 11-4 to win 3-0 in less than 30 minutes and move into his 30th PSA final. 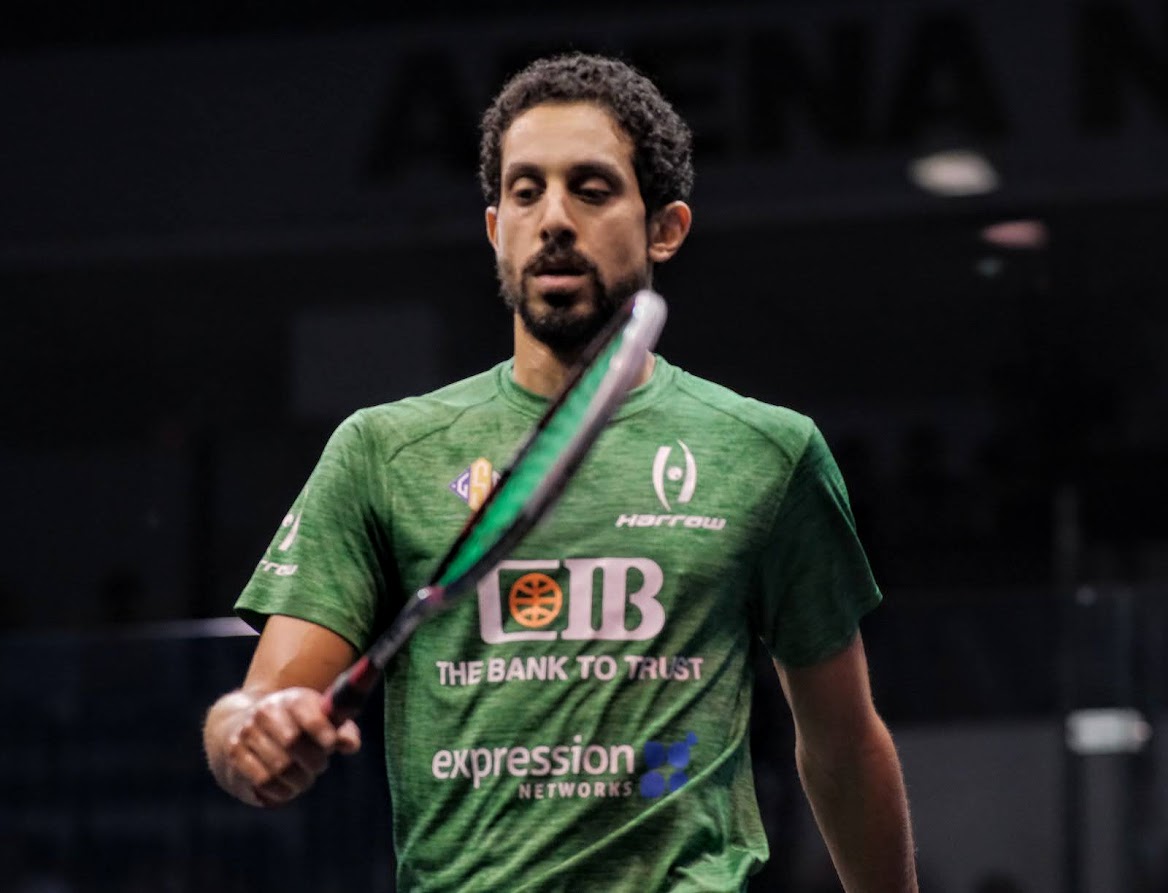 “I’m very happy with the way I played today, there was so many challenges, playing after 10:30pm, it’s been a long day, coming up against a tough opponent in Nicky, he’s been in good form, his win yesterday and his performance was quite something, so I had to be well prepared. I spoke to my coach and we came up with a plan and it was all about how well I could execute that, and i’m glad I did it well today and could get through in three.

“Mazen played really well today. I saw Joel was struggling near the end today but take nothing away from Mazen, he played some amazing winners and I have to be prepared for that and I have to come up with a good game plan and be disciplined to give myself the best chance.” 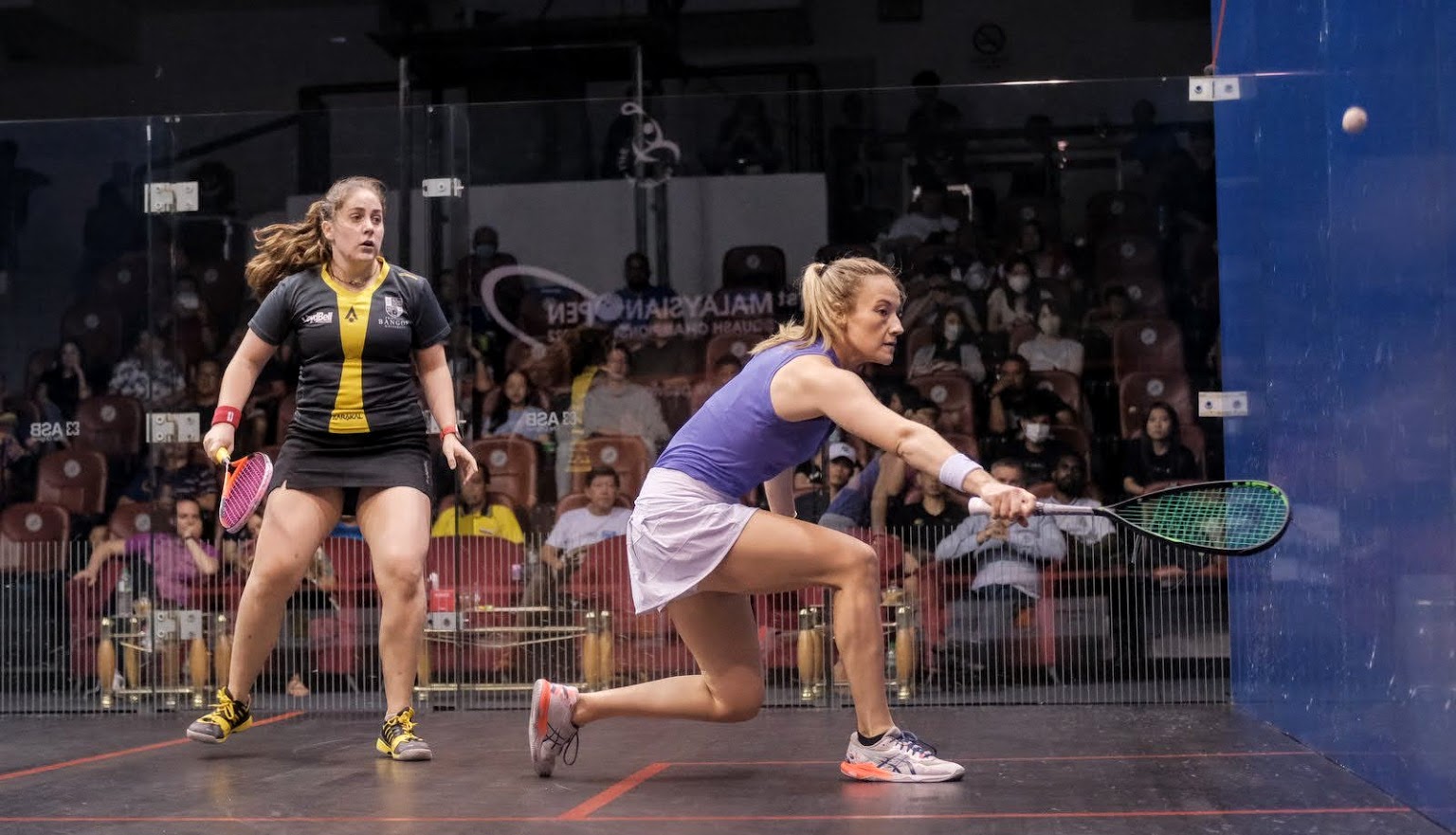 Top seed and Olivia Fiechter has made her way through to the final after overcoming a tricky encounter with Wales’ Tesni Evans in four games. 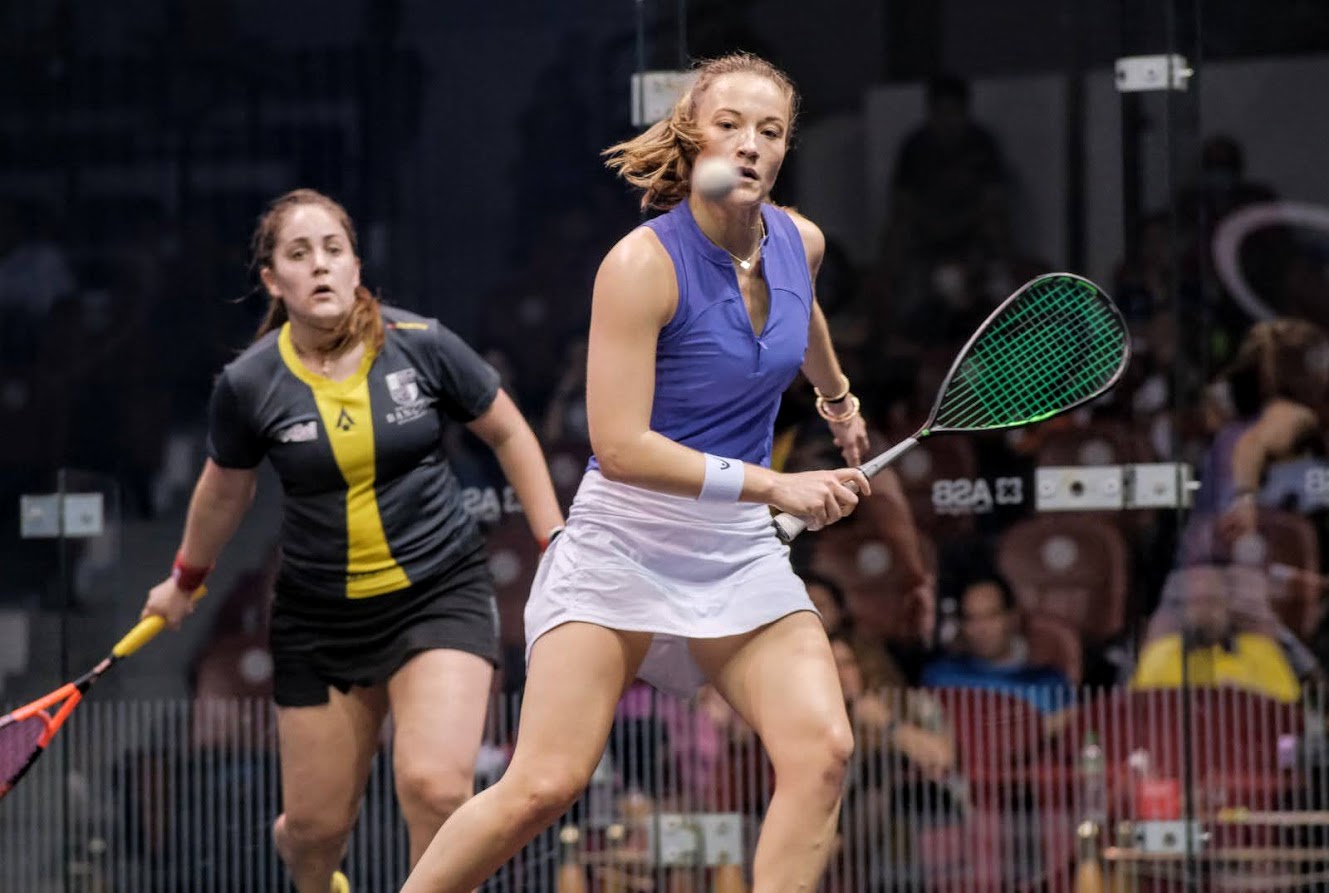 Evans has been on great form of late and carried that into the opening game, taking the ball on the rise and hitting the space on the court with great accuracy and disrupting the rhythm of the No.1 seed. Evans took the opening game 11-7.

Fiechter possesses a great ability to keep clam and focused in her matches and displayed that once again in tonight’s semi-final. She stuck to her game plan and started to string together some well structured rallies to move Evans around the court. Fiechter levelled 11-7 then continued to press and took a 2-1 lead in emphatic style, winning 11-3.

Due to the importance of the fourth game, the rallies became slightly scrappy with traffic issues creeping into the match as both players were reluctant to take any chances at the front of the court. Fiechter dealt with the disruptions better however and was able to move ahead to take the game 11-7 and the match 3-1 to reach the final where she will meet Belgium’s Nele Gilis. 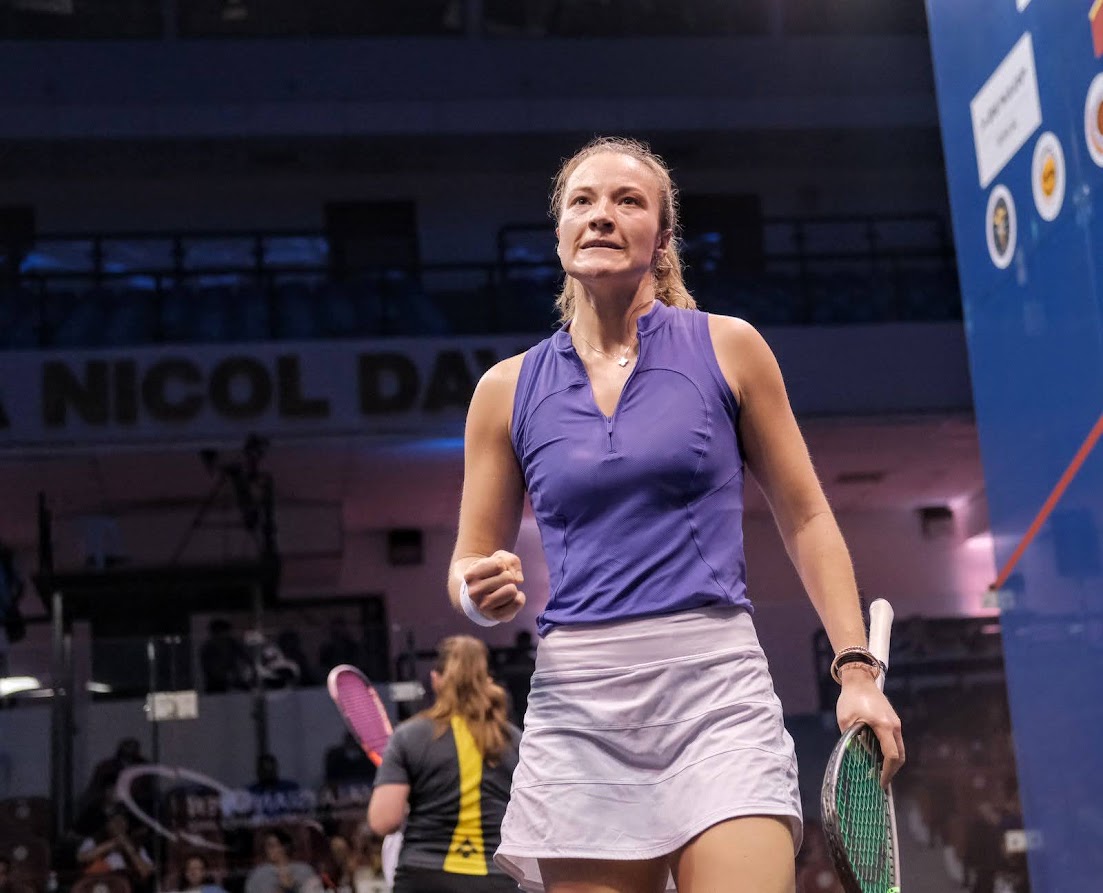 “Really proud to get through that, Tesni has been playing some incredible squash the last few months, she’s in great form and I knew I would have to play some of my best squash to get past her.

“I was struggling to find my length in the first game and she came out really aggressive but I’m happy with how I adjusted and found my way back into the match. I don’t always love when there’s so many decisions, we just want to play squash but I’m happy I could keep my focus.

“Tesni is extremely skilful, if you give her any time on the ball she can send you the wrong way so I wanted to play fast and take away her time and thankfully I was able to do that and get through.

“It’s the same prep as always, its just another match. But I’m really excited, I played her last week in Singapore and a lot of the time when you lose a match like that you don’t get another chance to play them again so quickly so I’m really excited.” 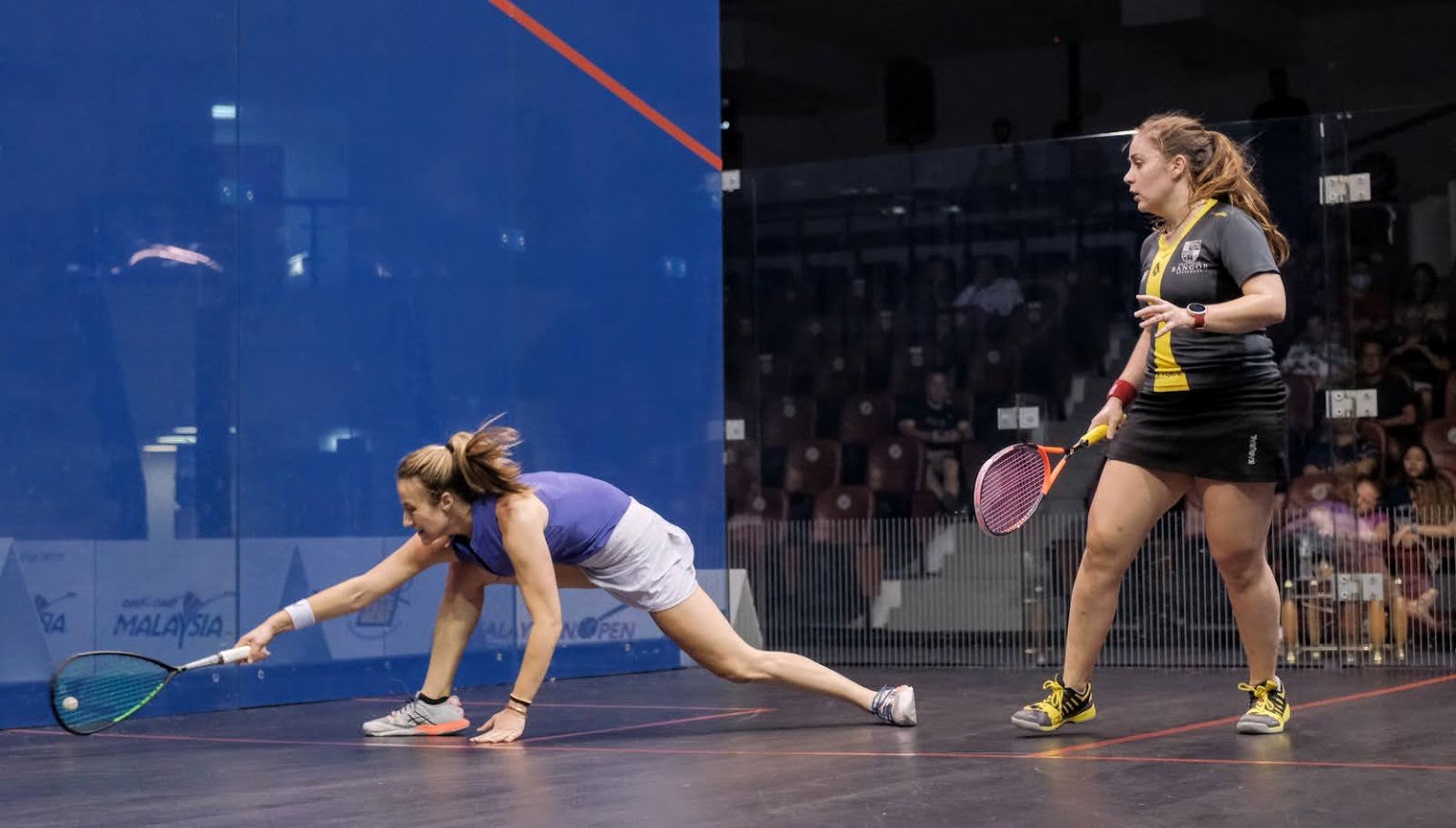 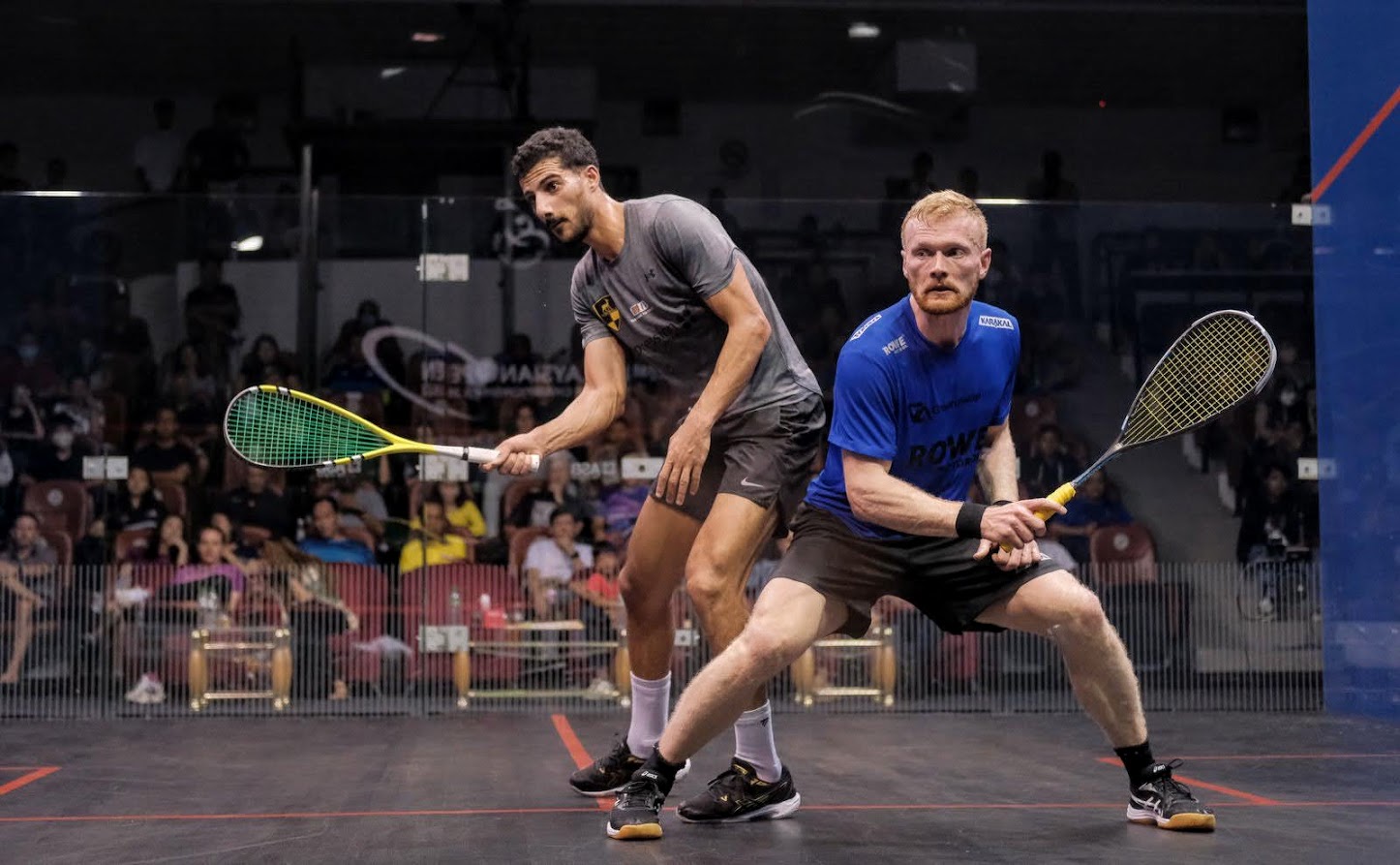 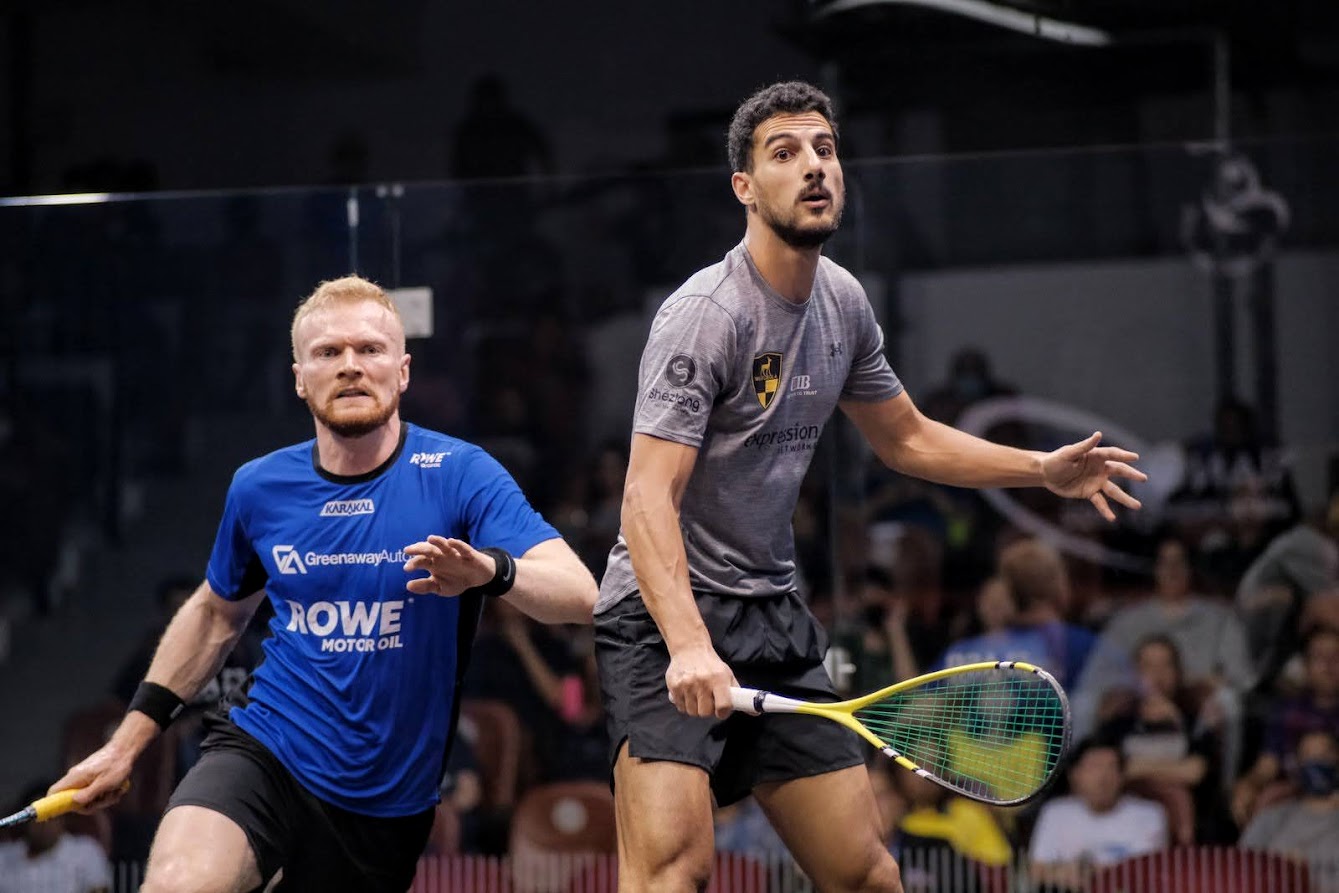 Hesham has steamrolled both his second round and quarter final opponents in the tournament, with both matches not lasting over 30 minutes. Hesham has looked dangerous throughout and started in great style, twisting and turning the Welshman into all areas of the court. The Egyptian’s squash was taking its toll on the body of Makin has he seemed to be struggling with a back issue but continued regardless and lost the opening two games 11-7, 11-9.

A moment of good sportmanship took place at 4-4 in the third game as a miscommunication with the referee occurred with a review happening that wasn’t wanted by either player. Makin won a rally whilst the review was happening and Hesham then served out to give the point back to Makin that had been chalked off. Makin would go onto win that game and force a fourth in the contest.

It wasn’t long before Hesham got back on track and took full advantage. 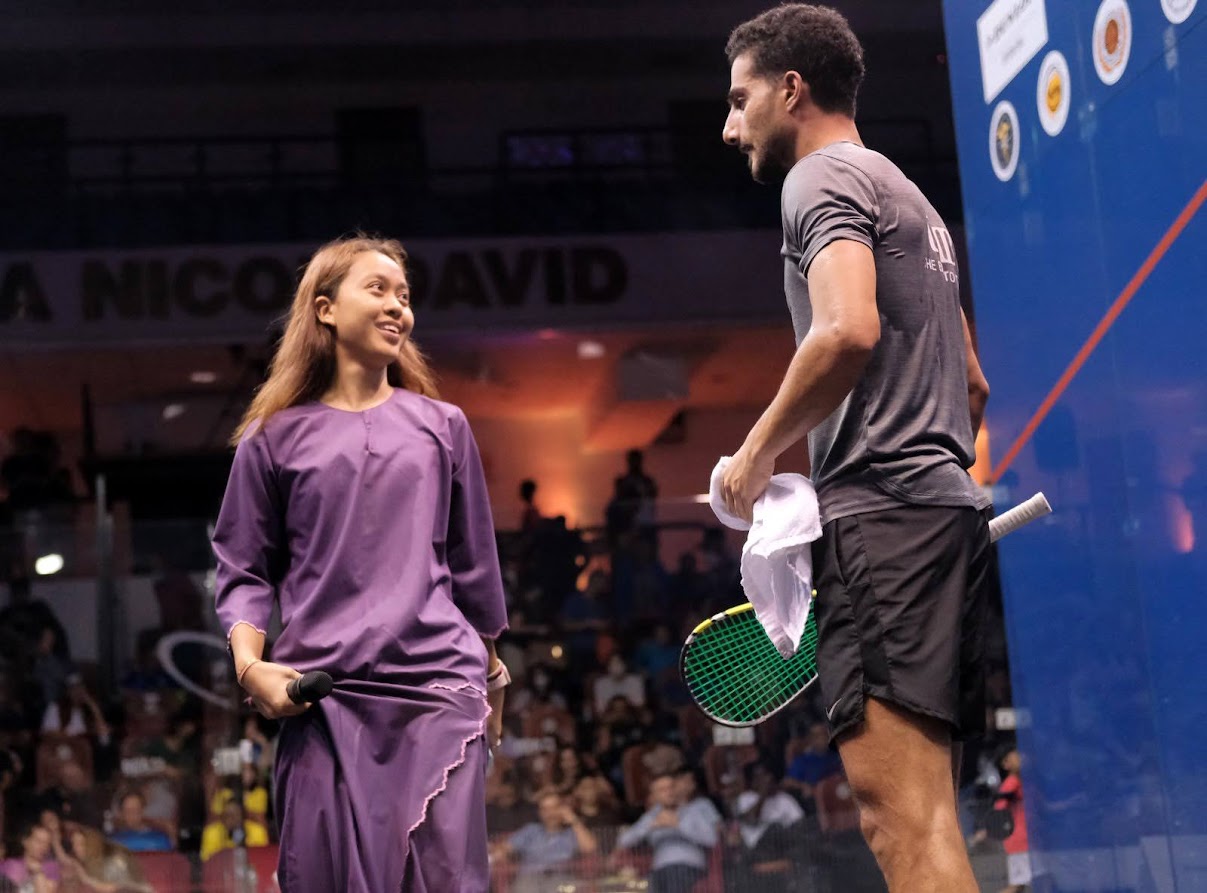 “It’s my first win against Joel. I haven’t been beating some of the top guys for a long time now and with injuries its been very stop start for me so I couldn’t get momentum, so I was really happy I could play last week fine and this week as well. It looked as though he had an issue with his back and I’m glad I’m on the other side of that and not the one injured ,but I wish him a quick recovery and hope it isn’t anything serious.

“I’m playing either Tarek or Nicci Mueller, they are both really good players, they’re both in good form and I haven’t beaten Tarek in a long time and the matches are always tough. I just hope to have a god chance against one of them in the final tomorrow.” 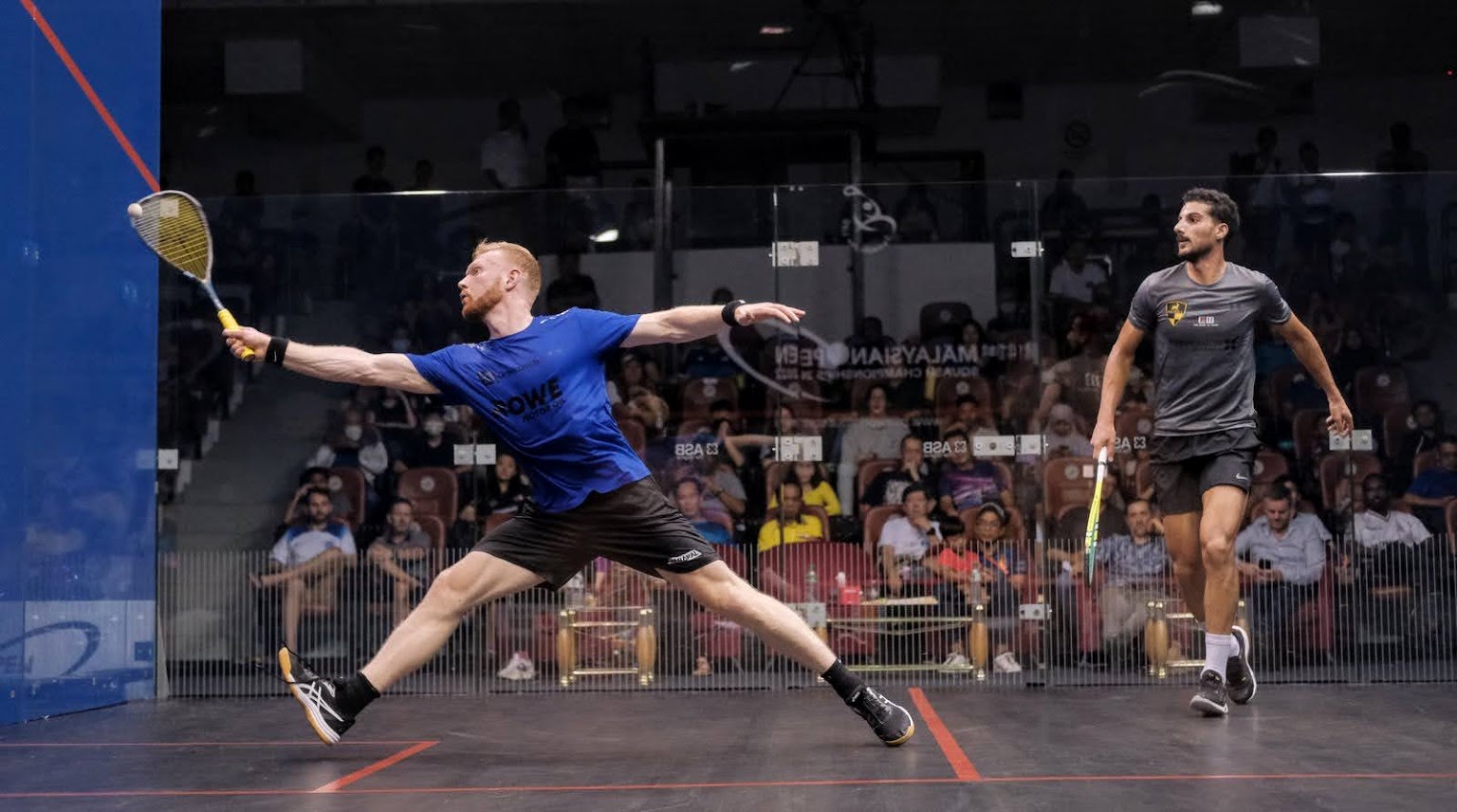 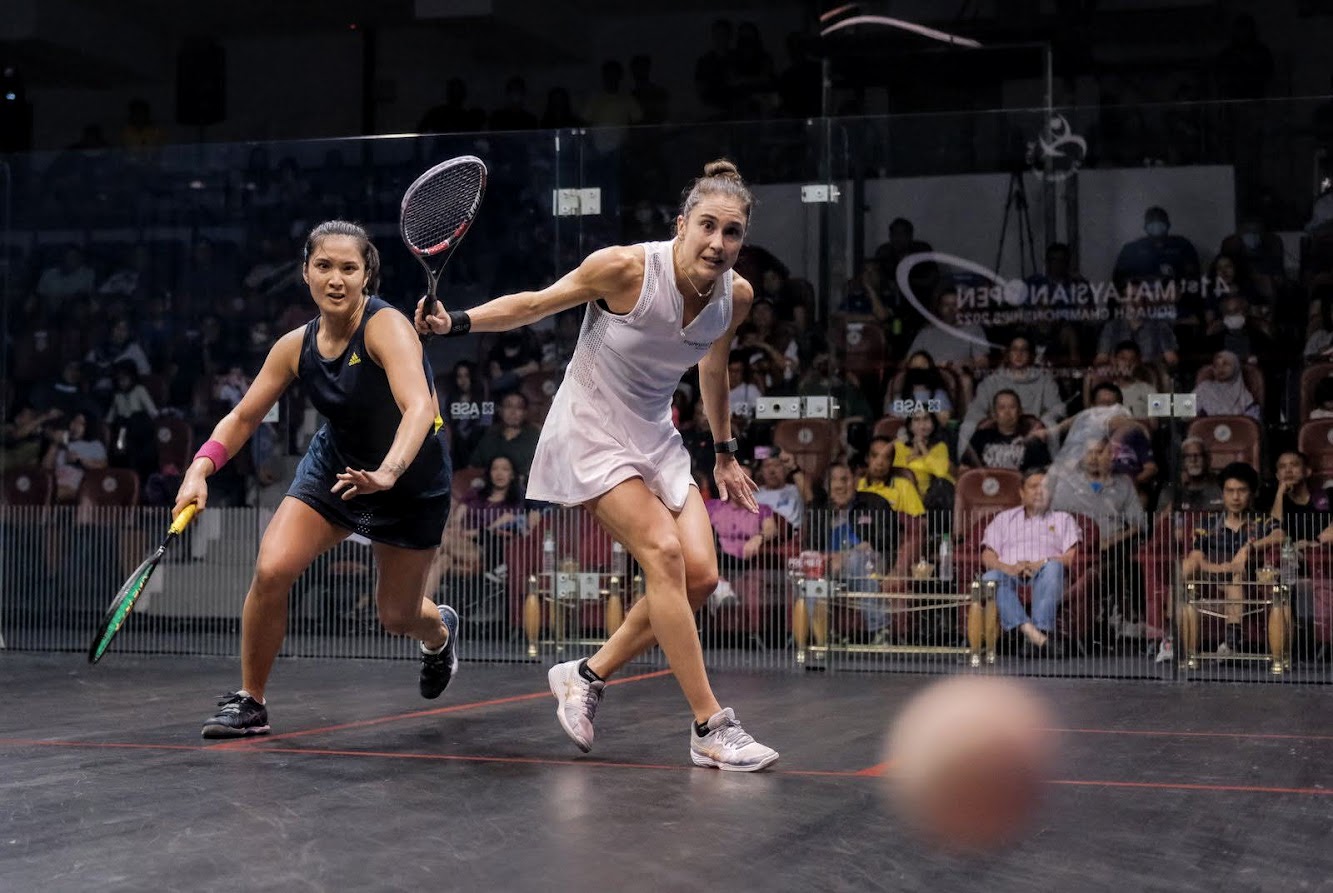 Belgium’s Nele Gilis opened up semi-finals day with a brutal 3-2 win over Rachel Arnold, the only remaining Malaysian in the draw, to reach her third final of the season.

Arnold, spurred on by the home crowd, started the first game in great style, firing the ball in short with great accuracy and picking off the Belgian No.2 with ease. She ran out to a 9-5 lead and despite a spirited comeback from Gilis, she was unable to stop the Malaysian converting the first game 13-11. 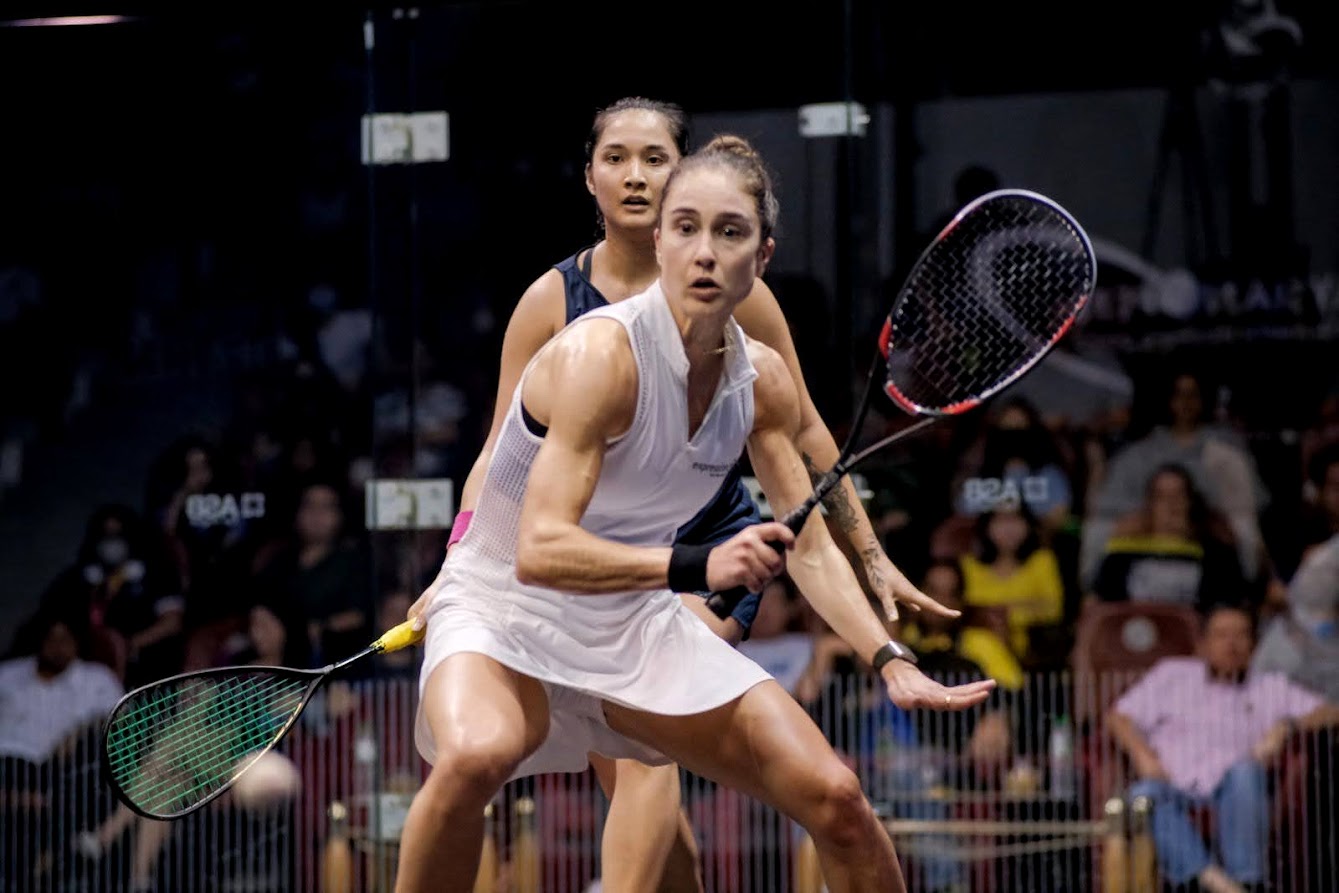 Gilis responded in the perfect style, hitting her targets terrifically well and forcing speculative shots from Arnold which were finding the tin more than she’d hope. Gilis took game two without dropping a single point and carried that form into game three. Gilis showed her superior athleticism, moving onto Arnold’s attacks with great speed to counter attack the 26-year-old. The Malaysian No.2 was able to string some winners together but Gilis took a 2-1 lead, winning 11-9.

Despite Arnold regrouping and finding more winners against the always energetic, Gilis, to take the fourth game. Arnold’s defence ran out as the physicality and pressure from the No.2 seed just kept on coming. The home crowd tried their best to give Arnold one last push but Gilis took the game 11-6 to move into tomorrow’s final. 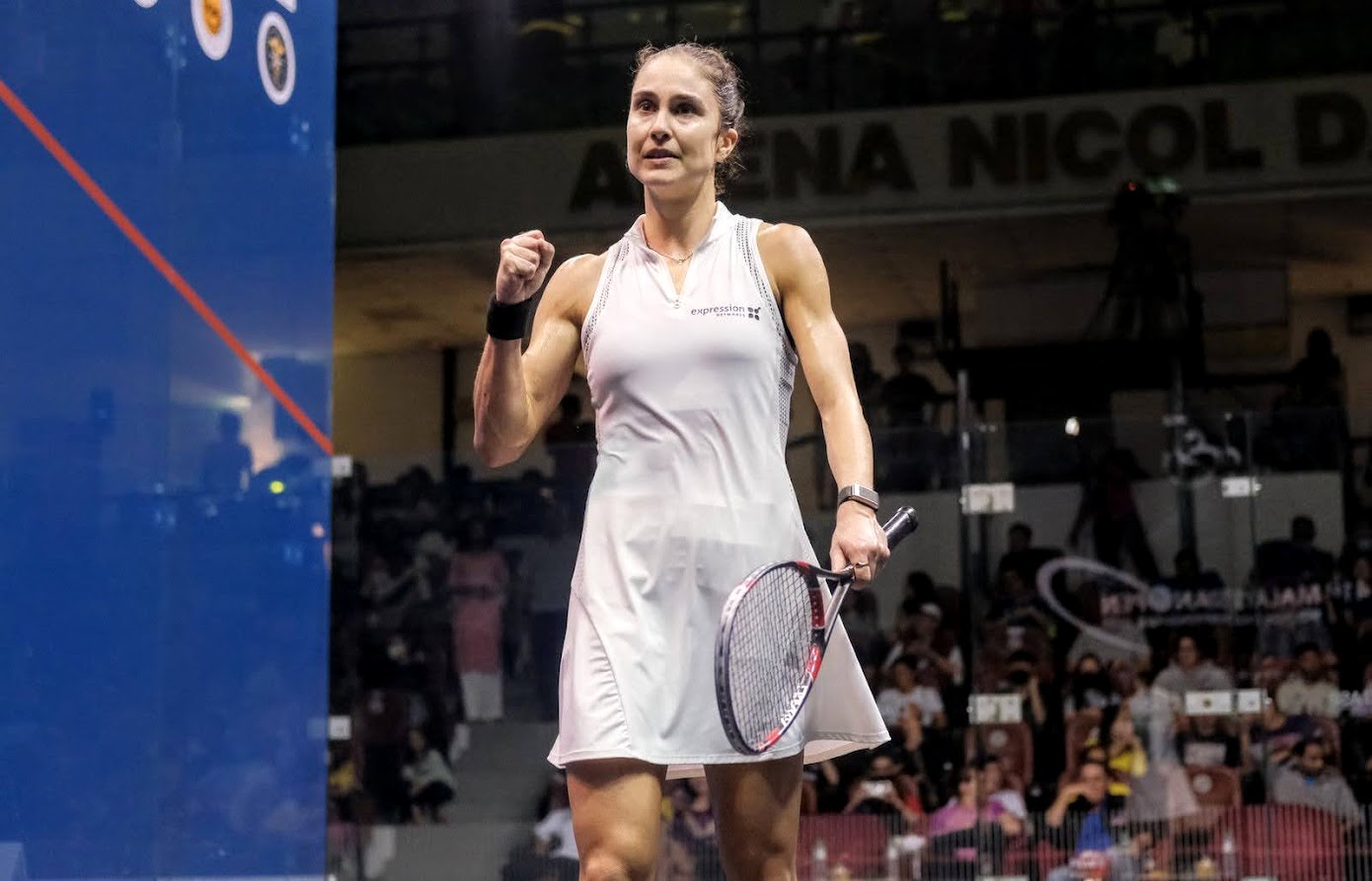 “Rachel was on fire today. I knew she would be with the home crowd and I guess it fired her up and it made me a bit anxious. She made my life very difficult and I just went into survival mode and I’m just happy to scrape that one.

“I'm not sure how I won the second 11-0, I just tried to focus point by point. The score doesn’t tell you how the game actually was.

“Its going to be a battle no matter who I play in the final, they’re going have an enormous battle I think so I’m looking forward to relaxing and watching them battle it out.” 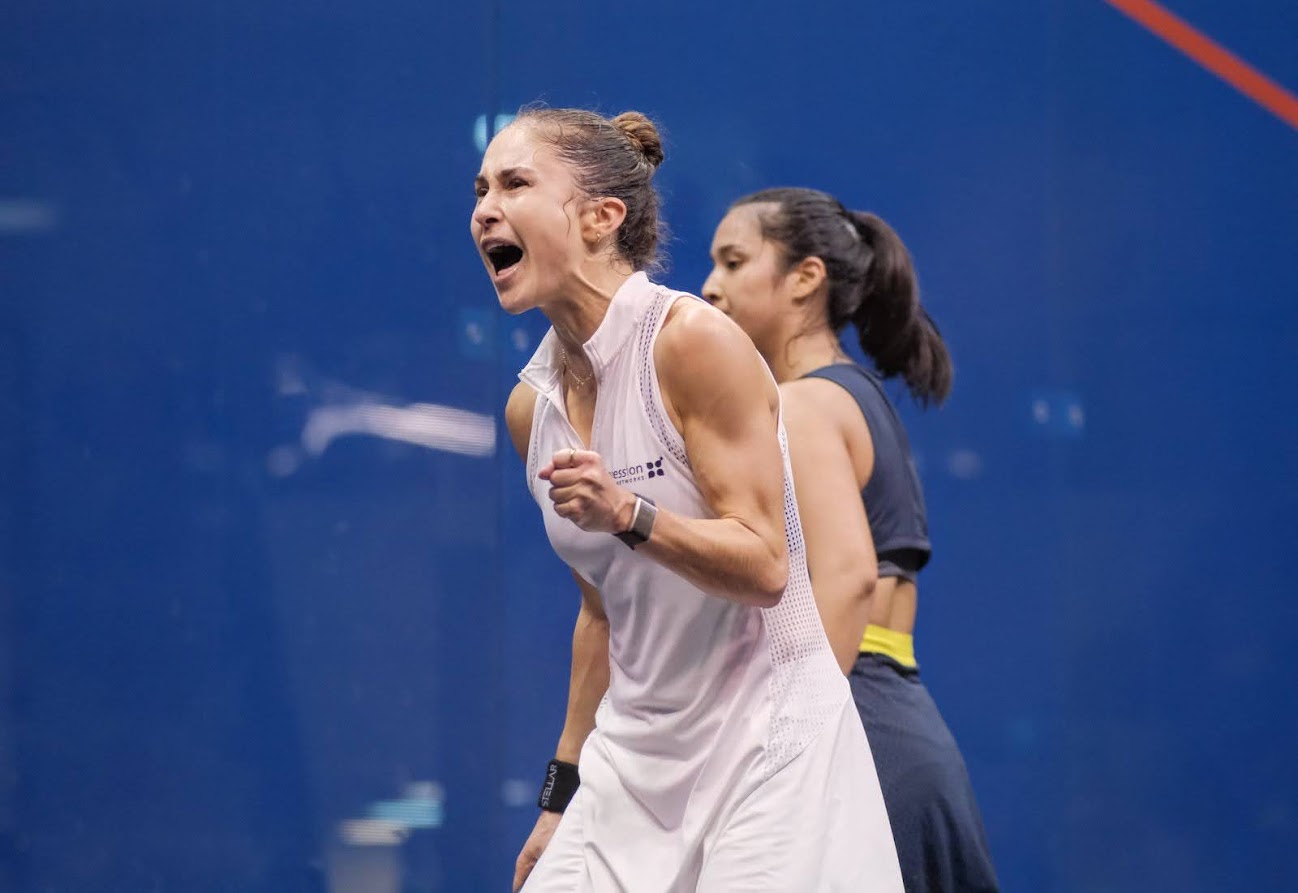